God the Father - Me His Child

It’s not my comfort zone, this Zoom group “Art and Soul” where proper artists who know what they are doing hang out! Then there’s me still in nursery school, potato printing with poster paints.  Not false modesty on my part, if a picture turns out well it’s more accidental than anything.

The “soul” bit of it relates to a Bible verse as a prompt. One of us chooses a Bible verse. It is something we have thought about and meditated upon. There is always so much truth to be gleaned and to be shared with others.

The sme verse in The Passion Translation is lovely.


“And you did not receive the “spirit of religious duty,” leading you back into the fear of never being good enough. But you have received the “Spirit of full acceptance,” enfolding you into the family of God. And you will never feel orphaned, for as He rises up within us, our spirits join Him in saying the words of tender affection, “Beloved Father!” (TPT)

What’s not to like about being fully accepted, being enfolded into the family of God and never having to feel orphaned?

I wanted to just sit this one out.  Whatever picture in my head I have of what I would like to do I have no idea about how to do it. I Lack skill, but It’s like every skill in life. For all of us it’s down to practice. I don’t practice painting enough.

Fathers are a mystery to me. Mine was a one parent family, a mother and six children. What I know of my dad, who died of cancer when I was young, I know from what my mum told me and what my brothers and sisters have shared. My own memories are vague. I can’t tell the genuine ones from the ones that have been accepted as memories because I have heard the stories so often. There are times when I wonder how different a person I would have turned out to be if he hadn’t died.

The Fatherhood of God has always been a bit of a struggle. Seeing fatherhood demonstrated in other families has been my fall-back position and I have known some excellent fathers. 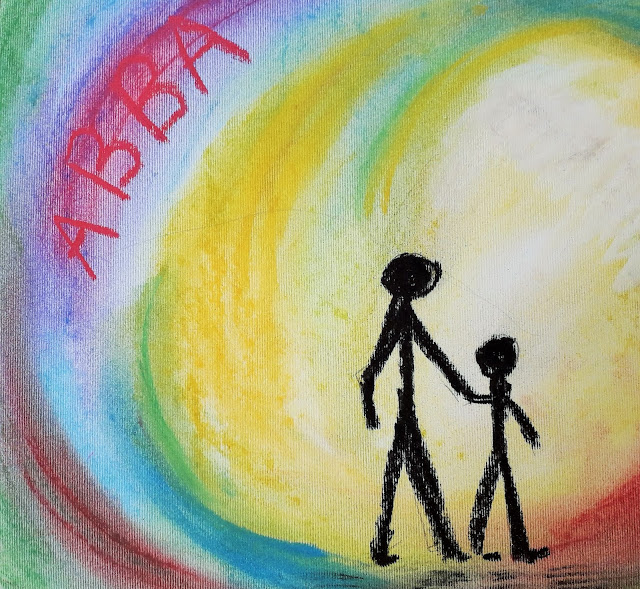 After a few attempts at other ideas I settled on a father and son walking side by side. Whoever invented stick men should be made a “sir” or something. You can’t go wrong with stickmen. It makes me feel a little bit guilty for all those times I banned stickmen when pupils were drawing comic strip cartoons of the life of St Columba. The end result was vaguely ET going home.

The “show and tell” bit of the afternoon was upon us. I had coloured around my father and son in rainbow shades of soft pastels. Walking anywhere with God is walking into a life of promise. Yes, there was a journey to be made. The father’s hand will never let go.

It is a mystery how God would want to adopt us as His children.

Thanks for sharing Mel....honesty and faith are a mighty combination.