“So I give you a new command: Love each other deeply and fully. Remember the ways that I have loved you, and demonstrate your love for others in those same ways.” John 13:34 (The Voice) 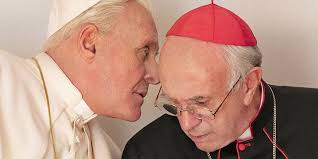 Not so long ago I watched the Netflix film “The Two Popes”. I don’t think it’s biographical by any means but more a vehicle for exploring opposing views of how the Roman Catholic Church should operate in a changing world. Benedict XV1 adheres to the traditional teaching of the Church. Jorge Mario Bergoglio who eventually becomes Pope Francis seeks to find ways to make church accessible to ordinary people. He seeks to pull down walls. Part of the narrative is about Pope Benedict plans to retire, something that Popes don’t tend to do. He is looking for Pope Francis to take over. I suppose he wants to find out the quality of the man he wants to pass the baton on to. They lock horns.

After Benedict’s election, Bergoglio flies from Argentina to Rome to meet with the pope, It’s not long before Benedict calls Bergoglio’s words and actions into question.

“You’ve been one of my harshest critics, and there’s a lot of competition for that title,” the pope growls.

“I was misquoted,” Bergoglio replies.

“You openly give sacraments to those who are out of communion — to the divorced, for instance.”

“I believe that giving communion is not a reward for the virtuous,” counters Bergoglio, “it is food for the starving.”

“Ah,” clucks Benedict, like he has the cardinal in a trap. “So what matters is what you believe and not what the church has taught for hundreds of years.”

The Argentinian coolly counters with Mark 2:17 — “I came to call sinners” — which, he notes, “the church has taught for thousands of years.”

We live in a minefield. We are vilified by some if we take one course of action and vilified by others if we don’t. The phrase “coming out” seems to apply not just to individual’s declaring a certain orientation or preference, but church leaders or denominations expressing support for the diversity of decisions people make on a whole range of issues. Bible verses become like the ball in a tennis match in long and brutal rallies. There is always a loser, sometimes there’s no real winner, in the exchange.

I have sided with the Benedicts of the world. I wish I could say it bought me peace in doing so. I have also sided with the Bergoglios too, with that same uneasy lack of peace. I am a great avoider of controversy, but that brings me no peace either. I am aware just how uncomfortable sitting on a fence can be.

Love. Jesus’ response to people he encountered, the good, the bad and the ugly, was always one of love. For some, like the rich young ruler, it involved pulling no punches and telling the truth to someone who had a distorted version of truth. For others it was not telling a truth, because the person already knew it, but needed compassion instead.

“A bruised reed he will not break, and a smouldering wick he will not snuff out. In faithfulness he will bring forth justice;” Isaiah 42:3 (NIV)

If Jesus can live this way, Jesus in me, through the Holy Spirit, can ive this too in today’s often hostile world. I just have to follow Him closely.
Posted by meljkerr at 9:54 pm