The decision to start walking home was a balance between a number of things. On the one hand, it had been raining and I didn’t have a brolly. I was carrying a bag of shopping that wasn’t heavy but with an uphill journey it wasn’t light either. On the other hand, there were roadworks in the town centre. Sitting on a bus waiting for our turn with the lights didn’t appeal. There was also an art exhibition at a studio, and a new coffee shop to explore on the road home. The walk home won. A bus stop further along the road was there if needed.

The coffee shop, named “Two Sisters” was run by two men which made me feel like I had been mislead in some way. Maybe they were the husbands or the sons of the two sisters. The scone, which I shouldn’t have been eating anyway, had raisins in it. We joked, the man at the counter and I, about which one of us would get the most pleasure from picking out the raisins when I asked if there were any plain scones. The music playing in the background was a saxophone blues thing. There was a pile of reward cards next to the till. I could have claimed a free coffee after drinking a dozen others. I didn’t pick one up. I had no plans to regularly return.

The exhibition was showcasing the work of the students in the art academy. The building in a previous life had been a school, and then a college, and then, seeing as it was a listed building and not available to knock down and build flats there instead, had become a space where artists could rent bits of it. I have swithered about renting a bit but the rent is too high and the artist in me is too fledgling for me to justify a studio space.

Across Land and Sea – it would have been nice to have seen a picture perhaps of a ship upon the high seas – the Two Sisters café had one on their walls. It was all a bit too modern for me. Perhaps I should have picked up a catalogue at the table at the entrance. Maybe that would have given me clues as to what the pictures were. There were lots of dark and earthy colours – the land. Were they real earth packed into the frames? 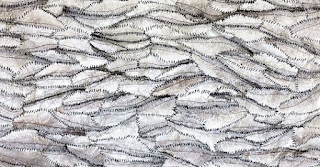 The sea was represented by a hanging. It looked and felt like the dried skins from fish sewn together with black twine. The person would have had to have eaten a lot of fish, and been careful not to damage the skin, to have enough skins to make the hanging. It must not have been real fish skins but it looked real enough.

On one shelf there looked to be paper squished into balls. I’m not sure if you are supposed to touch these things. There were no warning notices. They were not paper but hard clay painted white.

My curiosity about the exhibition was satisfied. I could tick it off a to-do list. I’m not sure I had learned anything or had been inspired by anything that I saw.

Sometimes you need someone that knows what it is all about to tell you. There are some kinds of learning you don’t get by just being there or seeing something. Someone needs to say what the artist was thinking, or why they chose that shade of grey, or what they want to stir in you. Otherwise you just miss it. And perhaps in the missing it, you decided that all art is real earth packed into frames and dried fish skins sewn together and deem it not worth bothering with in the future.

My early days of church attenance were kind of like that. I had become a born again Christian when I was eighteen. I'd grown up in the Roman Catholic Church and never knew that I could have a personal relationship with God. The young Christians I knew worshipped at the Brethren Church. As I went off to university, I found a Brethren Church in a nearby town and began attending. Being there is in the church, sitting in a seat, listening to prayers and sermons - none of it helped me to understand what my commitment to Jesus meant. I didn't know enough about anything to know why I was there or how being there was supposed to impact my life. In those days a Brethren Church person reeally needed a letter of introduction from a previous church and church minister and I didn't have one. I suppose they presumed a Christian maturity I didn't possess. I needed someone to tell me what church and faith was all about. I didn't get that. Amazingly enough, the seed that that been sown during that summer, that led me to a commitment, did not get snatched away. I just struggled needlessly. I moved churches to somewhere smaller, somewhere nearer, somewhere not Brethren and got taken under someone's wing and nurtured. Once I was learning, I was flourishing. I knew what Christ had done for me, the direction my life was going in. I knew why church mattered and how important it was to know what the Bible said, and how to live by what it said. There is no clulessness anymore.