Nature Illiterate And Not Proud Of It

Yesterday afternoon I found myself poking around a pebble beach lifting up stones looking for crabs. It was the last of the winter walks organised by the Sottish Waterways Trust.

A day or two before yesterday we would have been peeling down to T-shirts and slathering on the suntan oil. The temperature dropped. Gloves and hats were out in force. It was a foggy day. Everything was still. Everything was silent.

We walked along to Carnac Point. The last time we had been that way there were bulldozers digging up stuff and workers laying down a proper path. They had done their work and we stopped here and there to admire the picnic tables engraved with poetry, observations and pictures of birds.

One of the tables was dedicated to St Kessog. None of us, not even the retired Religious Education teacher among us, knew anything about the saint.

“Kessog was the son of the King of Cashel in Munster and started his religious life while still in Ireland. It is said that a swimming accident when he was a child led to the deaths of the sons of a number of visiting princes. Kessog brought them back to life and averted a war by spending a night in prayer. He was then educated at a monastery by St Patrick and St Machaloi before setting out for Scotland.”

The water was so still and the Kessock Bridge so perfectly reflected that it looked like lorries and cars were travelling upside down along with the usual right side up ones. We had been told by the lads from the Scottish Waterways Trust to look out for otters. We settled for crab hunting instead. I wasn’t too enthusiastic about turning over stones. The ones in my garden tend to hide a variety of beetles and wood lice – things that run towards me at great speed. 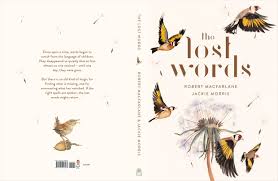 Earlier in the day I had been leafing through an old copy of Country Living. The car was having its front tyres replaced and the magazine was on the coffee table in the waiting room. I was sipping my way through a hot chocolate from the vending machine. I wasn’t interested in buying a country cottage, or replacing the décor and furnishings. The recipes featured asparagus in various dishes.

An article “The Lost Words” caught my attention. Later that day, had I not lost my words I could have named the particular brand of crabs that scuttled sideways beneath the stones. I could have identified the trees that marked the path. I could have told you which birds were wheeling above. I’d already been told on a previous visit all about the seaweed.

The article was about the way nature vocabulary is diminishing. Apparently in some test, run by some scientists, young children could identify just about every Pokemon character ever thought up. They couldn’t tell you what a bluebell looked like or point out an oak tree. They were nature illiterate!

I remember years ago I did a teaching practice in a primary school in a small village in the Northumberland outback.  Mine was the first drop off point for the bus. I was there long before most people. I spent the hour or so in the kitchen with the school cooks. Along the windowsill there might have been pots of herbs or a host of wooden spoons pretending to be flowers in a vase. What was there for certain were a number of pairs of binoculars. In between peeling stuff, chopping up stuff or stirring stuff, one or the other of the cooks would stop by the window, pick up the binoculars and search the perimeter of the playground – a green hedge of bushes and trees. They were looking for birds and would call me over and point out anything interesting wildlife. I remember they were not teachers. One could imagine teachers doing that – but kitchen staff? I was nature illiterate then and I am not fluent yet.

Robert Macfarlane, an author and poet, and Jackie Morris, an artist, got together to produce a book about nature. The poems are not called poems, but spells – a reminder that the best poetry is spoken out loud and transforms the hearer in some way. The article contained examples of pages from the book – the poem, or spell, and an illustration. The poetry reminded me of Kenneth Steven’s work. I prefer his poems on nature. If poetry is all about the sounds of the words, then The Lost Words uses them well. If you need to see onomatopoeia at its best then this is these poems excel!

Perhaps, had I not read the article, I would have talked my way out of joining the lads from the Scottish Waterways Trust on their short walk. I would for sure not have ventured down to the pebble beach. The last time I had been down there examining seaweed, I had slipped on the wet stuff and plunged face down into another seaweed pile. We had been looking at sea lice. Urg!

It seems to me that now is the time to start looking at nature much more closely than we do.  Some of these things may not be around in a decade or two.

When I get to heaven God just might ask me for my opinion about Carcinus maenas and copepods. It’s best to start genning up now.
Posted by meljkerr at 5:43 pm