The Inverness Botanical Gardens aren’t that big. I couldn’t imagine how it would take an hour to walk around it. I hadn’t factored in the stopping and the talking and the advice given. It was more than walking.

As usual I arrived early. There was a cluster of women near the door. There’s a queue? Not at tall. The women were being giving a training session – volunteers. The garden advice they already knew. How to use the till for plant purchases was the mystery being uncovered.

Maybe I’ve only visited the garden in summer. Maybe I have thought that without flowers a garden has nothing on show. I got a glimpse of the backstory, the behind-the-flowers perspective. Flower beds were stripped back to ground level and bare soil.

She, Pam, dressed in gardening garb, full of answers to every question asked, began by pointing out the ivy on the wall – or in this case the lack of it. My next door neighbour has been pulling down his ivy over the summer. The birds made homeless have relocated to a tree, noisy in their disapproval of his ruthlessness. It’s all about the wall. Left unchecked, the ivy root dig deep into cement and motar and the whole thing becomes a Jericho about to happen.

The flower bed beneath the wall was similarly pulled up. Flowers had turned brown and brittle and were taking up space. They’d done their show and, at the end of any show, the stage is dismantled and packed away – bulbs lifted, brushed off, wrapped in newspaper and given the rest of the year off.

The ghost birches begged to be stroked and admired as we passed by. So we stopped to give them praise. There’s nothing wrong with washing down the bark, white bandaged. It was on the to-do list.

She talked about the pond. A heron had sat on the roof of one of the green houses. It had eaten the fish in the outside pond and now gazed lustfully down at the koi fish in the tropical greenhouse. Big momma and papa koi fish circled the pond with nervous upward glances. The younger generation swam on fearlessly.

A quick peak into the potting shed, Pam talked about the perils of plastic pots and how they were moving over to an environmentally friendly pot made from rice husks. With a six year life span they were not cheap but they left no carbon footprint as they passed away. These changes did not come easy to a cash strapped business and had to be argued for with the people that held the purse strings.

Another tree, red barked, lured us over. I liked the “please touch” lure but the flowerbed below made the tree technically inaccessible. Technically? When a person wanted to stroke the tree, the flower bed didn’t stop them. Pam was pleading for a bench that circled the tree trunk. The tree was probably as high as it would grow but the trunk would thicken.

Out through a gate and into the place where the gardeners played. A basket held windfall apples and a pile of scotch bonnet chillies with an invitation to help yourself.  A wigwam, carpeted and cushioned, stood off to one side for children. Insect hotels sprung up by walls and fences. Wild flowers planted last year were cleared away.

Inside the tropical greenhouse we “ooohed” and “aaahed” at a tiny pineapple in its growing and spied a bunch of green bananas high up. 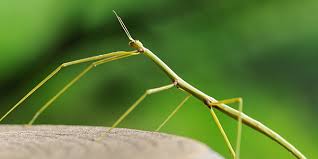 You see what you see and you don’t see other things until they are pointed out to you. Once upon a time, before the cacti had taken over the other room, there had been insects and snakes and lizards in tanks. The stick insects had got out. They had followed God’s command to increase and multiply and fill the space. I wouldn’t have seen the chewed leaves on almost every plant. I wouldn’t have noticed a moving twig. They were causing so much destruction. More active at night, Pam and others had offered to do a night shift, overtime you will, to catch them – the big ones with pink knees about to lay eggs. The purse string holder declined.

The walk came to an end. I went home and raked up the leaves from the back garden – as told to. My own mulched leaves for spring!

A lot of work went into the gardens.  OK so the flowers don’t just appear in their right places in the various beds but I hadn’t realised just how much work went into making it look good, I hadn’t seen the back-to-soil tear-ups, or thought so thoroughly about, even in a garden, watching out for the environment.

We often picture our lives as gardens in need of care. We talk about the weeds that need to be pulled out and the seeds that need to be planted. We talked about ploughing soil and digging up the fallow ground – but we entirely miss the truth that it is an ongoing project.

I think of all the things going on at the botanical gardens, and how vast and varied the garden is. My walk with God is also vast and varied. God is working in my life all the time trying to get me to work with him to dig out the old worn-out sermons ready for some new truth. He wants me to help pull down the pride that digs deep into the walls. He wants the wigwam fun and scotch bonnets to give away. And the stick-insect errors that chew away at revelation, that sound so real, He wants me the chase them down.

God knows what my life should look like. He knows how to get me from autumn brown and crisp to spring bulb planting and new shoots and onto summer’s blaze of colour. He could do it all by Himself but He chooses not to. He involves me. Not just in my own faith walk. He lets me plant something in, and pull something from, the life of another person. He calls it kingdom living.
Posted by meljkerr at 8:36 am