Objects Out of Place

It had been a while since I had met up with the writers at the Spectrum Centre. They still knew my name which was nice. We had been shifted from our usual room to somewhere larger where the sound bounced off the walls. I was equipped with my hearing aids for once.

After catching up with the news and the writing pieces people wanted to share, we got down to business. We were introduced to Raymond Carver – not in person, you understand. He wrote short stories – short on the fluffy stuff. Bare bones, if even that, the story we heard, “Why Don’t You Dance?” included no names, just the boy, the girl and the man and a roomful of bedroom furniture arranged on the front lawn. No explanations of why it was there. The reader is left to supply the details, make their own connections and jump to conclusions.

We moved on to talk about things we had seen that seemed out of place. One person talked about an army rucksack he spotted, leaning against a wall.  The plumage of a pheasant was sticking out of the top and the smell was rancid. The bag and the bird were just abandoned. Another person spoke of small pink bags filled with doggy-do tied to the branches of a small bush. The bag was tied up with a neat bow. Listening, someone suggested that it might not have been doggy-do at all, but he heard about drugs transactions where the pink bags tied to trees were used by drug pushers. Sometimes, however, a pink bag with doggy-do is just that – a baby nappy bag standing in for the usual scooped poop.

We had a few minutes to write up our own stories, real or imagined, of finding things in places where they didn’t fit. Here’s mine…part biographical. 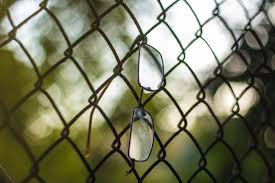 I wish I had his courage, I decided. It might, of course, have nothing to do with courage. A boy, perhaps, playing street league football in the field out back. The need to not break his glasses. But there they were, frost encrusted, hanging from the wire fence, waiting for someone to recognise them and reunite them with their short sighted owner.

“Four eyes!” The insult lacked any kind of creativity but had followed me through every school classroom and playground. I tried to point out that I didn’t have four eyes – just two. Two eyes that did not work as well as most people.

It was the frames that shamed me. Pink and plastic they announced my poverty to the world. They were NHS frames with lenses not much thinner the bottom of a glass bottle. No one ever commented on the colour of my eyes – hazel flecked with blue.

I wish I’d had the courage to leave my glasses somewhere, hanging perhaps on a stretch of wire fencing as I stumbled away half blind.

I did stumble for a while without glasses. They had got broken. I was in the habit of slipping them under my pillow at night. Perhaps the tooth fairy would take them away even though they looked nothing like a tooth. Truth is there was no bedside table to place them on. They broke.

I was of the age where image mattered. Did I just simply refuse to get another pair? Did I have a teenage girl’s hissy fit? I don’t know. I know I never owned up to all the things I couldn’t see. I sat at the front of the classroom not so I could see the board better but because I always sat at the front. Seeing the writing on the board from the front of the class was as much an impossibility as seeing it from the back.

My teenage years were a blur. Nothing to do with drugs or alcohol consumption – just poor sight. I particularly remember a Christmas party game at the local Mormon Church. I wasn’t a Mormon, but I was a Donny Osmond fan flirting with Mormonism.

The game involved sitting in a circle. Someone winked at someone else and swapped seats before the person chair-less in the middle of the circle could find an empty seat. There was much winking going on but I never saw it happen! They gave up on me after a while, thinking me a simple idiot that hadn’t listened to, or understood, the instructions.

I came to my senses eventually and went back to the opticians.

If only someone would wink at me now!
Posted by meljkerr at 8:41 pm