What was I doing at 4.00 am yesterday? Go on, take a guess. Asleep perhaps? Actually, no. I was sitting outside on the garden bench listening to the dawn chorus.

Where did I intend to be at 4.00 am yesterday? Go on, take another guess. Asleep for sure. Actually no. I intended to be down by the Caledonian Canal with a bunch of other people, listening to the dawn chorus with an expert telling me which birds were singing. Apparently it’s not an every-bird-at-once-top-of-your-voice celebration of a new day. There’s an order. The blackbirds tend to be first up and then some other bird’s next and then another one and so on until eventually every bird is singing. I wanted to be there with the experts but driving with eyes half open and body half dozing didn’t seem a safe option.

“They’re claiming ground, Mel,” said God. “Why don’t you claim some ground too?” I don’t sing at 4.00. I snore perhaps. I wasn’t about to wake up the neighbours with a loud, off tune warble but I did pray. I don’t claim that my prayers shook the gates of hell. Eyes half open, body half dozing – it didn’t match up to that generation of powerful men of prayer who also prayed at 4.00 am.

The Dawn Chorus thing at the canal was one of the opening events for the Scottish Mental Health Arts Festival Highland. They had pancakes afterwards.

What was I doing at 6.00 pm today? Go on take a guess. Watching TV? Tackling the ironing pile? Actually, no. I was down at the Bike Shed in Grant Street at the Scottish Mental Health Arts Festival. They were hosting an art exhibition on the theme of New Beginnings. The people who produced the art were mostly beginners, and mostly
using art to express feelings and emotions.

There were one or two people that I knew. Creativity in Care have been involved in the project and it was good to catch up with folk. I also bumped into a writer friend whose opening conversation starter was “Have you done your homework?” Eh? The homework might refer to homework given at a Thursday creative writing class which I sometimes go to.

There was coffee to drink, pictures to look at and people to talk to. I did all three but not in equal measure. I brought my empty paper cup home seeing as it’s the first time anyone has written my name on a paper cup before. I’ve seen it in adverts but never thought cafes did it for real. The pictures? You know, I have one picture that would have fitted in. One wall was dedicated to people’s Picasso portraits. Maybe I ought to frame mine I did years ago. There were other paintings too. Some real things like lions and tigers (and bears), and some landscapes, and some other stuff and I really don’t get.

Having done the socialising, we were invited to listen to a few speeches. Nothing long. Just information really about what different groups did about mental health. As ever, the hearing aids were left on the sideboard at home so the head was tilted slightly to favour the good ear.

A man was invited to give a longer talk about mental health. He was fiddling with something the whole time as he read his speech. There wasn’t much in the way of eye contact.

He was talking about the need to slow down our lives. The stress that we deal with is often as result of the hectic pace of living.  We are like those pinball machines – like the bouncing around, pinging this or that, lights flashing, sirens going off, levers pulled and snapping and everything frantic. We need to slow down.

His first suggestion was learning how to juggle. It’s apparently a Samurai thing, the hand and eye co-ordination and concentration. I once tried to learn to juggle with a trio of apples. The apples got bruised but there was a wonderful apple fragrance in the room afterwards.

His second suggestion was fishing. It’s not a Samurai thing this time and has more to do with quietness and peace and watching the water for evidence fish presence than anything. This I have done twice. The second time I caught a fish – it was a baby fishing pool, so crammed with fish for beginner fisher-people, and sweetcorn on the hook rather than anything exotic, that you would have to be very unlucky not to catch anything. 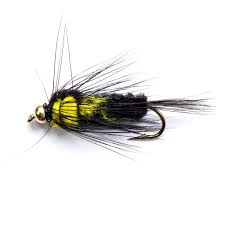 His final suggestion, and what he had been fiddling with the whole time, was making flies for fishing. Somewhere in this house there is a box – a red plastic box divided into little compartments. It contains flies for fishing – hooks, feathers, wires and stuff. The speaker made a fly by twisting fine wire, snipping here and there and adding strands of colour. It was pernickety stuff and not something you could do while watching an episode of Coronation Street. A friend of mine is learning the skill of paper folding. Not origami. Flower and stuff. It is mind-focussing. She also knits jumpers with complicated cable patterns. I write poetry.

It’s not that the problems go away, the man said. It’s just after this time out spent juggling balls, or fly fishing, or making flies for fishing – or paper folding, or complex cable knitting, or writing the poem – afterwards you come back to something fresh. What you couldn’t seem to do before you did the juggling, you can now seem to do much more easily.

The slowing down – if only the world would let us slow down! The world doesn’t have time for the time-wasters.  It’s all about setting and meeting targets and filling every second of every minute with activity.

Jesus went fishing. Perhaps he knew how to juggle. Mostly he just left the crowd behind, climbed a mountain and spent time with His Father.