Speaking to the Wolf and the Lamb 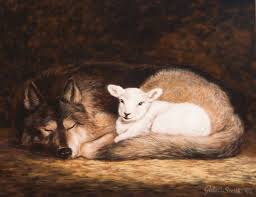 “In that day the wolf and the lamb will live together; the leopard will lie down with the baby goat. The calf and the yearling will be safe with the lion, and a little child will lead them all.” Isaiah 11:6

I suppose I have always thought of the wolf lying down with the lamb not in a literal sense. I have tended to see in as the church family with all its personalities, getting on together, showing unity and working hard to submit the tendency to dominate or terrorise others, to God. I have known too may wolves in the church family and too many lambs. Sad to say, I might have given up any utopian vision of a world living in peace and harmony.

There must have been a time before the Fall, before the serpent, Eve and the fruit eating event when the hunter and hunted didn’t exist. There was a time when there was no eat or be eaten mind-set in animals or in people. Venus fly traps didn’t trap flies once upon a time. Spiders wove webs to show off their creativity, not to catch insects.

I’ve also thought about seeing it as all the complex bits of a single person living in peace and harmony with themselves. I love the word “integrity”. A dictionary defines it as “the state of being whole and undivided.” When all the bits of me fit together properly, and there are not broken bits or drifting bits, just a single whole – that’s what I would like to be. It’s a challenge for any single individual or a community or a nation – to be whole and unified, not broken into bits.

Malcom Guite’s advent anthology “Waiting on the Word” contains a poem by David Greive - “Advent Good Wishes”. The poet speaks to the wolf and the lamb. The wolf is told not to stop roaring but to roar about thing that matter like justice for the poor. The lamb is told not to fear because the Messiah is on their side.

Part of our problem, as individuals or communities, lies in not saying anything to the wolf or the lamb at all. We don’t tell the wolf to change its roar direction. We don’t tell the lamb that there’s someone on its side. We don’t speak at all and our silence gives approval to whatever injustices are there. The wolf keeps eating the lamb and the lambs keep living in fear and no one tells them there’s a different way to live. We accept as normal the things that were never meant to be so.

What is the wolf in me that I am not telling it to turn its roar into a cry for justice for the poor? I want things my way. I want my advantages. Sometimes I roar at the wrong people to get what I want.

What is the lamb in me that I’m not reminding it about God’s converting grace and the Messiah that saves me from jeopardy? I allow myself to be terrorised by the people with all the power. I flinch when I should be facing up to people and situations that make me cower.

I was looking out of the window not so long ago. The day had been bright and sunny. The afternoon had clouded over.  Evening had darkened. The half-glass-empty bit of me wondered if in one day I had glimpsed what my year might look like. A beginning followed by a clouding over and ending in darkness. I’m not up for that.

It is time to start talking to the wolves and the lambs and the leopards and the goats. I’m not that clear yet on what we ought to be telling them but silence won’t do.