Cake for the Soul

My last words before my husband and I parted company last night were “There’s no way anyone is going to pull me to my feet and get me dancing,”

Sunset café at 6.30 last night was hosting a taster session “Expressive Movement”. Yes, you are right the clue was right there in the title – movement. Also mentioned in the tag were words like writing and space and joy – three words that combine to define my sweet-spot. I had packed my bag with poetry books, notebooks and a plethora of pens under the impression that I would find a joyful space to write – and cake to eat. I thought the music would be something in the background, soothing and creative. Any movement I planned to do was the pencil kind across a blank page.

There was a group pf chatting people crowded around a low table. They had the sofas and the soft chairs underneath a large patio umbrella festooned with fairy lights. There was a scattering of teapots and cups. They chatted as if they knew one another well. They were young people, tall, slim and pretty – everything I am not (apart from the pretty my husband gallantly said as I retold the tale this morning over breakfast.) We were separated by more than just furniture.

Bear in mind it was the writing and space and joy I was there for. The call was to take off shoes and socks and stand in a circle. I was happy to part with the shoes but kept my socks on. I wasn’t happy to reveal a corn plaster on my little toe. I was down to my last one in the pack and didn’t want to lose it. A man as young as I was had come in for a cup of coffee. He wasn’t dressed for movement of any kind. He was cajoled into joining the circle. We held hands and walked one way, then another while some jungle beat played through the speakers. I have to say that there was no skipping or dancing or anything remotely energetic at this point. We walked around the room on our own stopping every so often to breathe deeply, lift feet, raise arms and strike an interesting pose. We did jazz hands and waggled rear ends every so often.

We broke off into pairs. This is when I realised that the bunch of people I assumed knew each other really didn’t. There was a shyness about people as they paired off. The man as young as I was drew close. The young, tall, pretty people were a little intimidating.

The next bit was called “fight or play”. No touching was allowed. We were not supposed to thump anyone, accidentally or intentionally. The music changed to a different tempo and we struck kung-fu poses and swung arms, blocked pretended blows and backed off. My partner would have been floored quite swiftly if the fight had been for real.

We stopped to talk to our partners, talking about what we thought had happened. I thought it was all about shrugging off the straitjacket of small talk and pleasantries. He confessed he had no idea what is was all about. We swapped partners and I teamed up with a young and pretty youth.  We were encouraged to add sounds. Had it been a cartoon page there would have been “Pow” and “Zap” in spikey orange boxes. It was surprisingly cathartic. It is something I have done on my own in the past but play fighting with strangers had its appeal.

We stopped and were issued with paper and pens and encouraged to write down words and phrases about the experience. Sadly, there wasn’t enough time to write a poem, rhyming or otherwise.

Actually, that’s pretty poetic! We were to put the paper aside and find a space somewhere, sitting or lying down. The music was plant music – soothing, gentle, making no demands on us. Some struck a meditative pose. Others; like me, just leaned back in a chair against the wall and closed eyes. There was no guided meditation exercise. I was not asked to imagine anything. No one told me to picture my feet melting into the floor or any other such stuff.

Another change of music. We were roused to our feet, back in the circle. It was a little like the ockey-cokey with knees bending, arms stretching, left leg in stuff but without the ra-ra-ra at the end. The jazz hands were back and the waggling rear ends. Where people might have been a little restrained at the start, they were beginning to throw themselves about more jubilantly.

There was a selection of different musical genres and we were told to just express ourselves. Some of the music was classical and we launched around the room with invisible partners. Some music was pure disco and the place took on a night club feel for two or three minutes. Some was jungle stuff and we leapt about aping monkeys. 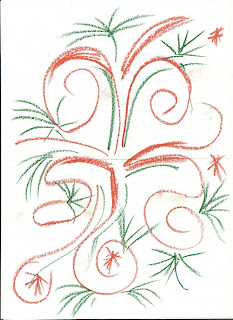 Another pause, this time to retrieve the paper and draw something. Wax crayons were rationed out. Some set to the picture with brows furrowed and tongues licking lips.  My art aspirations are limited at best. I wielded my orange and green crayons well aware that I couldn’t draw what I wanted to convey. Words are my media not crayons.

One last circle time, walking one way then the other and the session came to an end.

I admit that I was a little wary at the start. I didn’t want to be ambushed by something new age. Move the whole thing into a forest clearing and, yes, alarm bells might be ringing. Stick a golden calf in the middle of the circle and, yes, I’m leaving the room. It wasn’t like that. I think it was just tapping into a more playful side of people and creating a safe environment for them to let go.

I am a thinker. I read books a lot.  Much of what I do in my free time is solitary stuff. I like my own company. Being with others and being creative movement-wise had released an unfamiliar energy. I was buzzing. It was a good buzzing, not a bad buzzing. I felt that I had given myself a good stirring up inside. The stagnant deep in me had shifted.

“You live too much in your head,” said God. “So much of what you do is carefully choreographed and there’s little space left to play. This evening you let loose the child in you.”

I liked the child I discovered in me.
Posted by meljkerr at 4:47 pm

Sounds as if I missed out by not being there.
Glad you enjoyed it. David