It looked like the day was brightening up. I had itchy feet and the need to take them somewhere and walk off the itch.  I needed not to find myself in the middle of nowhere if it rained and chose a short walk along a path from the South Kessock turning point to the Caledonian Canal.

A very young and boisterous dog hassled me, demanding I play with him. His owners were not so young and boisterous and wanted the dog to be polite and well mannered. They dragged him away. Following them along the path, with the dog straining to get back to me didn’t seem a good idea. Besides there were spots of rain. The itch in the feet hadn’t really been walked off but, even though, as my husband tells me “You’re no made of sugar, you’ll no melt”, a walk in the rain didn’t appeal.

It is along that stretch of the road where the circle poems are. A year or two ago they built a wall along the river, part of the scheme to prevent flooding. I was involved in a poetry workshop to create circle poems – written in the form of a circle with two or more staring points. My own creations never made it on to the wall, but I decided to check is see if weather wear and tear or vandalism had destroyed the poems. Five feet thistles obscured most of them. 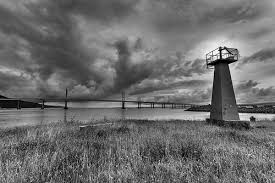 Not too far from the wall and the poems was a trail leading to Carnac Point. I have seen the trail before and dogs and people disappearing down it. Carnac Point is a small navigation light tower situated on the bit of land that juts into the Beauly Firth. To the left stretches the Kessock Bridge, right in front is the harbour and to the right is Inverness City.

I had pulled into the parking space near the wall and poetry and glanced over to the harbour. I thought I saw fins – dolphin fins or porpoise fins – fins!

I took to my heels and scooted down the path to Carnac Point. It’s only a few hundred metres, not a long enough distance to build up a sweat or to satisfy the itch in the feet. I got to the little light tower, and a bench and sat staring at the harbour wall. I dug out the camera from the bag, put it into zoom node and scanned the water.

I began to question whether I had seen fins. Maybe it was a trick of the wind on the water. Dark ripples rather than fins.

Years ago, when I first came to Inverness, the gospel outreach team I worked with had headed out to the turning point at South Kessock. We were doing spiritual things like praying and seeking the Lord. We sat at a picnic bench. Some of us had our backs to the water, others faced the waves. Was it early in the morning? A Sunday perhaps? Suddenly a fin lifted from the water followed by a black body and a tail. It was the first time I had seen a dolphin not in an aquarium. It was impressive. I suppose whenever I go back to that place it’s always in the hope of spotting a dolphin – but I never do.

Then, there they were – two of them. They were not playing games, or leaping out of the water or splashing about. They were swimming, fins, bodies and tails, lifting above the water and then sinking.

Then rain fell. My jacket proved not to be rainproof. I was wet in a matter of minutes. A couple of boats left the harbour, churning up the water, and the dolphins disappeared. Much as I wanted to stay and see if they surfaced, water was dripping from my hair, seeping through the jacket and through my t-shirt and plastering my jeans to my legs. My glasses were wet and I could see nothing.

Do you believe that I saw dolphins today? Is my telling you enough for you to believe I saw them? Have I convinced you they were there? There were other people standing at the same spot, taking pictures with their cameras.

I haven’t quite worked out how to download the pictures from the camera on to my PC. I have two pictures and you can clearly tell that there are fins in the water – two of them. Would my pictures be enough to convince you I had seen dolphins?

What I would really like to do, but can’t, is take you by the hand and lead you along the path to Carnac Point and let you see the dolphins for yourself and take your own pictures. Then you would know I was telling the truth – assuming they haven’t swum away.

I was reading Psalm 66 this morning. David puts out an invitation:-

“Come and see what our God has done, what awesome miracles he performs for people!”(Psalm 66:5 NLT)

What I’d really like to do something more than taking you by the hand and leading you along a path and showing you the dolphins in the firth. I too would like you to come and see what God has done, the awesome miracles he performs for his people.

“Amazing Grace, How sweet the sound
That saved a wretch like me
I once was lost, but now am found
T'was blind but now I see”

That’s my miracle. I try to live my life in such a way that you can see how that miracle pans out day to day, moment by moment.