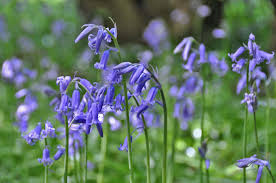 There was an article in the national papers this morning, just four small paragraphs or so, about a recent poll involving young people and nature. It seems that only 51% of young people can identify a bluebell and just 4% know what a red clover looks like.  The over 55s did better – 83% knew their bluebells and 45% knew red clovers.

This lack of knowledge about nature was blamed on the growth of technology and safety issues.  Concern for children’s safety means that wandering across fields and wading through minnow-rich ditches is a thing of the past.  I remember school days, afternoons, of walking out of the building and through a couple of fields down to a bridge crossing the Grand Union canal. We poked cow pats and watched a flurry of flies. We picked rosehips and sent them off somewhere to get made into rose-hip syrup. We kept a beady eye on frogspawn waiting for tadpoles in a pond.

Maybe the makers of the games that they play on computers need to decorate the scenery with trees and wildflowers. Rather than skirting around buildings and scaling rooftops armed with automatic weapons to kill people, they should move it into the forest. People perhaps should get shot not on the basis who has the biggest gun or the fastest reflexes, but according to how well or not they can name the wild flowers and insects around them!

Last week on a walk along the river I visited the cathedral. I like the quiet space inside and time to sit and be still.

Part of the space was taken up with an exhibition “My Ark of Nature”. An artist and environmental conservationist, Jonathan Sainsbury, had set up the exhibition. His artwork filled the small chapel space. He is based in Perth and has received a number of awards for his work in protecting the environment. His pictures are amazing. There were a number of very big charcoal sketches next to smaller, painted versions of the same thing. The scenes, of highland landscapes, trees and wildlife had an almost “middle earth, Hobbit look” about them. It’s not New Zealand at its most fantasy-landscape best – but just a few miles down the road, or up the road, or along the way from where I live – the rivers, the forests, the mountains and the deer that appear on my horizon.

Interspersed with the artwork were poems:-

I caught this morning morning's minionminion favorite, darling; also, an underling or servant, king-
dom of daylight's dauphindauphin prince; a French historical term, along with “chevalier”, dapple-dawn-drawn Falcon, in his riding
Of the rolling level underneath him steady air, and striding
High there, how he rung upon the rein of a wimplingwimpling rippling wing
In his ecstasy! then off, off forth on swing…

(from the The Windhover by Gerard Manley Hopkins)

Just as the sparrow seeks her home,
and the swallow finds in her own nest
a place to lay her young,
I, too, seek Your altars, my King and my God,
Commander of heaven’s armies.
How blessed are those who make Your house their hom
who live with You;
they are constantly praising You.
(Psalm 84:3-4)

And along the walls at various intervals there were child-level bird boxes to peer into and see pictures of birds.

And there was a wooden shelf stuffed to spilling over with books and feathers and little wooden birds.

And in the background was the sound of bird song.

I think if I had inhaled deeply enough I could have been breathing in a forest fragrance.

It was a delightful exhibition. The artist and his wife were there and talked through some of the pictures. One of them was of sparrows hopping around a blackberry bush. Jonathan explained that it was just the one sparrow that had posed for him, a sparrow that they had nursed as a baby, who lived in their house and ate at their table and really thought itself to be a person rather than a sparrow.

I was reminded of the few nature poems I had written over the years. I shared the poems with them. The last line of a poem “Abriachan” ends with this verse – which brings me full circle to the newspaper article this morning:-

Shame on me I cannot tell
The names of trees some know so well
Hazel, downy birch and yew
A tongue now spoken by so few
Posted by meljkerr at 4:48 pm