I had planned a half hour walk around a nearby wood.  We’ve had a few nice sunny days so I didn’t think I would need to do the gymnastics involved in avoiding the usual muddy puddles. I missed the turning on the right – they are building houses out that way - and climbed higher on a single track road. I encountered riders of bikes and of horses, a runner and a few cars. There’s a lot of open sky up above the city, and fields, forests and lochs.

I snarled at a raven, it could have been a crow, sitting on the fence. I’d read an article in the local paper of ravens forming unruly mobs to attack lambs. They peck out the eyes and the tongue and abandon the dead body. It had nothing to do with hunger, just mean-ness. Ravens are the Einstein of bird world. I wondered if they had picked up the habit of ganging up and tormenting the vulnerable from watching people, particularly the politicians. 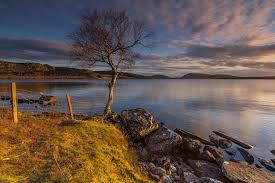 Then I saw it – a path leading off the road, a style to climb over and a loch in the distance. I wasn’t quite sure it was a public path, not then, not the first time I had walked along the path many years ago. There were notices that it was a site of scientific interest.

I parked the car. There was a perfectly decent gate and I’m probably not as fit as I used to be. Climbing over the style would have landed me in a gorse bush anyway. The road seemed a little more substantial. The notices were still there along with a few others closer to the water warning people that drowning in lochs was always a possibility.  Throwing sticks into the water for dogs to fetch was also discouraged. This water, apparently, was our drinking water so best to keep it as clean as possible.

All those years ago I’d written a short story inspired by the scenery and the “Beware” notice. I was reminded of it as I walked.

The rattle of stones along the path stirred me from my thoughts. The man was tall and stringy, legs burnt deep brown by the sun, his feet lost in heavy black boots with thick laces. A green jacket bulged in a dozen places with pockets almost spilling out their contents. As he folded himself down beside me, he removed a wide brimmed hat, skimming his hand through short spiky grey hair.

"It's a rare gift you have there, Ma'am." I couldn't place the accent but knew it wasn't the local Highland burr.

"Gift?" Curiously I lifted my face, hastily wiping a finger under a red rimmed eye, rubbing away the last trace of tears.

"To sit so still for so long." He grinned, "Not something I have ever managed to master." There was an awkward pause, "I bet you didn't even see the deer that just ambled across the path there."

He was wrong. I had watched the deer delicately picking its way through the bracken, turning a well-shaped head in my direction, before bounding off in tidy hops into a tangle of thick trees.

Suddenly there was a crackle of static and a tinny voice coming from one of the pockets in his jacket. The actual words were indistinguishable and muffled.

"Ah…that 's my boss. He sent me out here to tell you that you were trespassing." He sounded apologetic. "This place has been designated as an area of scientific importance." He pointed towards a surveillance camera, currently aimed at where we sat.

"Do you think I have stepped on the last surviving member of a rare species of beetle or something? There was a stile back there, just near the fence and there were no notices." My words were sharp and cutting, and I could feel the tears pricking at the corner of my eyes. It seemed as if the peace I had managed to catch hold of, like an elusive fragrance, was gone. "I am sorry, I've had a hard day. I…shouldn't be so rude. I am picking up bad habits from the kids I teach."

"Rude school children? We had a bunch of them on a school visit last week," he said sympathetically. He unwound his legs and stood up, holding out his hand to help me to my feet. He stood for a while, chewing his bottom lip, his finger playing with a loose green button on his jacket.

"Can I show you something?" His eyes twinkled with anticipation. Without waiting for an answer, he took my hand and began to walk further along the path. We veered off towards the left. The ground beneath my feet was soft. Tufts of prickly heather sank down beneath our weight like a sponge, springing back up behind us.

"It's not far." His stride was confident and sure, as I stumbled beside him. I was beginning to feel a cold wetness seeping through my shoes, and heard a soft squelching noise as I walked.

We stopped. Lifting my head I could see a blue stretch of water from a loch that had been hidden by the trees. There were birds soaring in erratic circles high in the air. The man wasn't looking up at the sky, but down beside his feet. Gently, he knelt down, his fingers separating a cluster of light green leaves.

"See?" Nestled beside his finger was a tiny orange flower. Four petals stood upright like sentinels, overlapping at the base. Very gently, he teased the petals apart. A small red tipped rod stood in the middle.

"Not beetles...this is our baby. Doesn't have a name yet. See this tiny bit here in the middle? This is awesome. Squeezed very gently this gives off a tiny amount of really foul smelling liquid. We have yet to discover all the properties of the substance, but early tests show that it has medicinal qualities. We think that it has the ability to repair cells…it's just amazing. It's still early days…but this could be the breakthrough in the treatment of so many illnesses. And there are a hundred other unique species of flowers in this reserve."

I found myself grinning at his enthusiasm, feeling somewhat repaired in my spirit. I reminded myself that for me, in my new teaching job, it was early days too and I had my own breakthroughs to look forward too.