We are an inattentive people.  We have a short attention span and an even shorter memory – except for my husband who remembers everything! He quizzes me on dates and places of various films we have seen over the years and hands out points when I get it right! The points in this case don’t add up to prizes.

I have been reading through some chapters in Isaiah. Verse 4 of the same chapter made me smile:-

There are days when I feel older than I ought to. I am encourages that God hasn’t put me out to pasture but has new things for me to do.

I was thinking about what God has said to me over the last few weeks and what I have done with them. I’d like to say that I have built them into my prayers for myself and for other people but it’s stretching the truth somewhat.

During our church prayer meetings there is an opportunity to worship and to listen to God. There’s plenty of paper and pens for people to write things down or draw pictures.  And there’s a time to share with others what God is saying. I draw something, usually. I can’t draw as well as I write poetry but I think they have some merit. 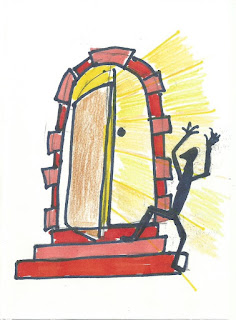 Dancing on the Doorstep of Opportunity

OK so the man doesn’t look like he is dancing. He looks like he is freaking out.
I thought this might be the doorway into heaven and people dancing close but not yet making the commitment to cross the threshold. In the gospels it speaks of counting the cost – the king going out to war or the man building a tower and working out whether the task can be done. People tend to think about what they might lose by committing themselves to God, rather than what they might gain. They see the Christian life in terms of “thou shalt not”.

This speaks to me of my own doorways, not into heaven, but into the greater works that Jesus promised we would do. I skip around the steps hesitating to commit myself. The task is greater than I am – but I don’t do it by myself so it should not be a problem. 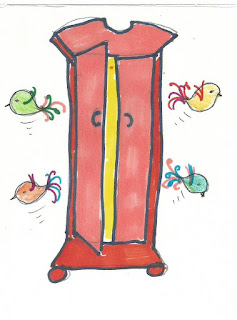 The other day I was reading an article in one of the Sunday papers. The most recent census answers were being compared with a census from fifty years ago. The conclusions they drew about religious faith were not encouraging. There were less people confessing faith in God, or attendance at church. “What are we doing wrong?” I asked God.

I had this idea of God going through a wardrobe and tossing out old clothes that were out of date and frumpy, the grey, the brown and the blacks. They represented prejudices, resentments and grudges that people hold on to.  They might also be habits, ruts in our thinking and reluctances to explore new ways of worship or prayer.

God began filling up the wardrobe with colourful attire. The robe of righteousness, He assured me, wasn’t grey. 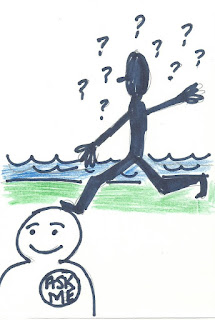 In this picture someone was walking beside a river.  It looked as if a cloud of tiny flies swarmed around their head. Possibly one of my first encounters with Scottish midges occurred when a lassie from the church invited us out on a picnic.  There was a nice wood not far from the house.  We found a clearing, plenty of sunshine through the trees, and spread out the feast. Seconds only went by before the cloud of midges descended. I am sweet meat. I became bitten meat and itchy meat and driven-to-distraction meat.

In my picture, however, a closer look revealed not midges at all but questions. The person was plagued by questions.

Standing nearby was someone wearing a badge with the words “Ask Me”.  So often we think in terms of going out to people and witnessing or door knocking – taking the gospel to people. God was saying that we are coming into a season where people are going to come to us and ask their questions. We need to be ready with our answers, or with our honesty in saying we don’t know but we’ll find out and get back to them.

The Treasure in My Heart 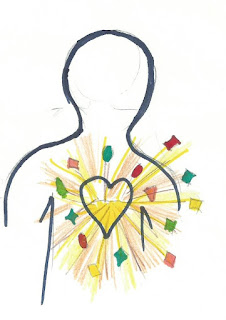 When Jesus called His disciples it was firstly to be with Him, and then later to preach and minster to people.  The being with Him was to take priority.  It was in the times of being with Him that they gathered treasure, for want of a better word, the equipping and resourcing for the mission.

As much as spending time of Jesus is good for us, it’s also about taking what we have – the treasure in jars of clay – and giving it away.

A friend of mine way praying that she would talk about Jesus more confidently with her neighbours. The treasure she has to give away comes out of the time she spends with Jesus.

So, that, among other things is what God has been saying to me. It’s now recorded so I can read it again and again and let the words fire my prayers.

Feel free to pray with me.