It’s not a typing error.  It shouldn’t read “Jars of Clay”.

I told you about the car magazine that I read the other day while waiting for Floozy to be equipped with winter tyres.  What I didn’t mention was that I asked the man behind the reception desk if I could take the magazine home with me.  He asked me if I was interested in getting a new car and couldn’t quite work out that there might be other reasons for wanting the magazine.

I don’t really know anything about cars.  I did an evening class many years ago to do with cars.  I think it was aimed at passing the driving test, but we were also encouraged to become more familiar with the car’s insides.  We didn’t look under a bonnet but were given lots of labelled diagrams.  This was in the days before powerpoint presentations.  From the diagram I knew where to look for spark plugs but not really what to do with them once I had found them.  The course didn’t do what it said it would do as I didn’t go on to pass my driving test.

I don’t know the life cycle of a car.  I may drive a car around, but how it got to be a car is a bit of a mystery.  It would appear the computer aided designs and 3D images are only at the very start of it all. Then it gets all very interesting.

Car manufacturers are a tactile breed.  Cars provoke in people the need to stroke.  It’s not enough for a car buyer or a car collector to put their head under the bonnet and check out the intestines of the car.  They have to touch it. 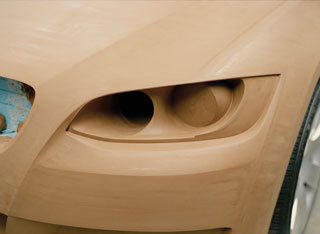 You can’t tell how it feels to stroke the bonnet of car by looking at a 3D image.  You need to make a model that you can touch.  So they make it in clay!

The article in the Spring 2012 edition of “Jaguar” explained the whole thing in detail.

It’s not entirely made of clay.  There’s a wooden frame and foam before a layer of clay is placed on top of that.  Over the next five days the clay is carefully scraped away by a machine until it matches the computer model.  What looks good on the computer image may not look so good in real life.

The clay modeller can spend the next two weeks scraping bits off one place, adding little bits of clay somewhere else until it feels perfect.  They are dealing with fractions of millimetres and know when it’s perfect and when it’s not quite there.  Once they think they are there, they will paint the model and take it outside to see what it looks like in sunlight.  They see how light catches certain features and how the shadows fall on others.  They take it back into the garage, remove the paint and begin scraping or adding clay as necessary.

Eventually it is declared perfect and they move on to the next stage of making the car.

The modellers are so good at their job that they can look at a design for a car and they can know whether it will be a good car or not.

By the time the finished car is at the motor show, two years have passed since the clay modellers got their hands on the clay.  They’re well into the next generation of car.

This verse came to mind as I read the article.  Isaiah might be speaking of jars of clay on a potter’s wheel, but I was thinking of clay cars.  I thought about how the light plays on the painted car outside in the sunlight, and where the shadows fall – how does the light play and the shadows fall on my life as God, the clay modeller, scrapes away a fraction of a millimetre of something in my life?

The clay car is not the end result.  We don’t drive around in clay cars.  The real car may look like the painted clay car, but it can do so much more.

My life now is mere clay.  It’s not the end result.  There’s a me to come, that looks like the clay me but it will be able to do so much more also.