It has been a while since I have slept the night through. Last night was no exception. I woke up perhaps two or three times. I don’t remember long stretches of wakefulness between times. If I need to go to the bathroom, I make it a policy to keep my eyes shut, and not turn on the bathroom light. I don’t want my brain to wake up so no sensory stimulus is permitted.

Last night, just before the last sleep of the night, I wouldn’t go as far as to say it was a prayer, but I thought it would be nice to have an uplifting dream – a God-revelation inspired one, rather than a Mel-stress generated one. 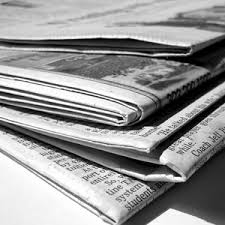 I dreamt I was sitting with a group of friends having a cup of coffee. The table was strewn with newspapers and we were having a lazy morning, reading papers, drinking coffee and chilling out together.

Suddenly someone pointed out a page of poetry. It was one of the big daily papers, not a local rag. They were honouring new poets on the literary scene.

“It’s one of your poems! You are in the paper!”

There were just two poems on the page, and mine took up a small section of one column – so it wasn’t a long poem. There wasn’t any critical evaluation next to it – it was just my poem. Now that I am wide awake, I don’t remember which poem it was – just that I knew it was mine.

I was aware that the radio was playing in the background. It was one of those programmes where there were two people doing the show. They were singing a song making the tune up as they went along. The words were familiar – it was yet another one of my poems.

Neither the newspaper editor, nor the radio hosts, had said anything to me about using my poetry. I felt that I was owed some kind of royalties. It was my material they were making use of, without my permission.

I got into a taxi and headed off the radio station. I spoke to the head of broadcasting and pointed out that they were breaching copyright laws by singing the words to my poem without my permission. He didn’t seem particularly worried and wrote a five figure sum on the back of an envelope. £16,000 or nothing. I could take it or leave it. If I wanted to make an issue of it I could see him in court,

At that point I woke up. I could still hear the tune playing in my ear and see the back of the envelope with £16,000 written on it.

It felt so real that, I wouldn’t go so far as to say it was a prayer, I found myself asking God whether it was a prophetic or not.

If God could be said to have eyebrows, He arched one rather dramatically.

And said nothing at all.
Posted by meljkerr at 7:43 pm