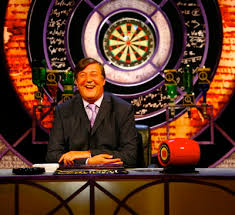 I think that the programme QI ought to come with some government health warning! Things that I thought I knew I am no longer sure that I know them at all. Holes are being drilled in that part of my brain that is labelled “Undisputed Facts”.

I am not sure any more that the Battle of Hastings happened in 1066, apparently we have more than the five senses I learned about and drew diagrams of in Biology and centipedes seem to have lost some of their legs!

There is a sense in which I suppose we should never simply take things for granted, or accept something as true because some else said so.

Just as Stephen Fry is drilling holes in my general knowledge, I have felt over the past or so a similar drilling going in my knowledge of God – although Stephen Fry is not to blame for that!

My every day circumstances don’t seem to match up with what I read in scripture. I want to believe that God will never leave me or forsake me, but that doesn’t seem to stop me from feeling alone and abandoned. I speak truth to myself, but it doesn’t always mean that I necessarily experience that truth in a tangible way.

I was having a very “down” time this morning. It is the usual battle with the winter blues. I was reading the opening chapter in John’s gospel.

Verse 14 reads “The Word became flesh and made his dwelling among us. We have seen his glory, the glory of the One and Only, who came from the Father, full of grace and truth.” That might be true of the disciples when they wrote the gospels, and members of the early Christians who had been in the crowd when Jesus spoke or healed someone, but that is not true of me. Jesus said that the people who had seen it all and witnessed it were blessed and that those who hadn’t seen and yet who would still believe were even more blessed. I just don’t feel blessed! I just feel it’s all a bit of a struggle sometimes.

The solution is to lay down the struggle before God. Perhaps we are hesitant to confess our struggles because we feel that we are letting God down, that we have failed in some way. Keeping a lid on it really doesn’t help. Frustrations come out in all sorts of ways – in physical illnesses, or, in my case, very unsettling dreams.

My morning study led to reading Exodus 33, Moses asking God to show him his glory. I think this request was not born out of a spiritual high. There had been the unpleasant Golden Cow incident (Cowgate!), and Aaron’s part in it all, the breaking of the first set of commandment stones. I don’t think that Moses was on a high. I think he was pretty discouraged and his request came out of a sense of desperation. What he knew about God just wasn’t enough to meet the challenges of leading the nation to the Promised Land. He needed more!

And God gave him more!

God uses our circumstances to drive us to our knees before Him. Stiff necks aren’t always our problem – it’s our stiff upper lips that gets in the way. We wrap determination around us like a cloak and persevere when we should surrender – not to the circumstances, but to God.
Posted by meljkerr at 10:47 am