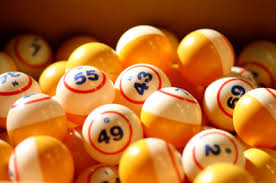 Rites of passage are ceremonies that mark important events in a person’s life. If I get around to sending a wedding acceptance card, later on in the month I will witness my friend taking her wedding vows.

In addition to the official rites of passage like baptisms, weddings and funerals, there are lots of unofficial ones. For my family, amongst the girls at least, it was our first bingo game! At the age of eighteen we were old enough to join the village Working Man’s Club - not that in my case I was either working (I was still at school doing “A” levels and planning to go to university) or a man!

My mother sat around the table surrounded by my elder sisters and we played Bingo! The winnings didn’t amount to much, unless it was the “snowball” which was £50 or more. That was quite a lot in those days! I may have won a line. The first appearance at bingo as soon after the eighteenth birthday was a must, but attendance after that was purely voluntary – and I never caught the bug.

A couple of Christmases ago, my husband bought me a set of bingo markers with a promise that he would take me to the new Bingo emporium (the word “hall” doesn’t match the look of the building!). The manager of the club was a friend of his from school days in Glasgow. Being told that it was my birthday in March, the manager had said that he would treat us to the night out – but we would have to pay for the “books”.

It didn’t quite materialize. We never seemed to dig out diaries and set dates. Last night we decided we would go. The bingo markers were dug out from the back of the drawer and we headed off.

This was most unlike the village Working Man’s Club. The place was huge! The foyer was all glitzy with water fountains behind glass panels. There was also a crowd of people outside the entrance smoking a last cigarette before heading inside. Having learned that we were “bingo virgins” someone walked us through the whole process. There were dozens of different game cards – one of which was a “national game” .Then our guide took us on a tour of the bar and the café.

Once settled down, two ladies at the other end of table saw to it that we were marking the right card at the right time. They tutted every so often when Joe and I giggled at how serious everyone was. I think they frowned when Joe won a game – not a mere £50 I can assure you!

What really struck me about it, comparing the whole thing with the Working Man’s Club was a lack of – the best word I can think of – colour. I remember that, in my first bingo experience, they didn’t just call the number. It wasn’t just “6 and 9, 69”. Many of the numbers had bits attached. 69 was the “upside down one”. Some of the numbers were easy enough to guess where they were coming from – “Sweet sixteen and never been kissed”, “Two fat ladies – 88” (in the age of political correctness, one can see why they may have abandoned that one – along with the sexist “legs 11”), “two little ducks – 22” (my own personal favourite). Some of them were not so easy to work out – something and 9 (could be 3, 4 or 5 – I don’t remember which) – “the Brighton Line”. This is what I mean by colour. I missed that last night – I missed the two little ducks!

I suppose that is where big business and simple enjoyment part company. No one could say that in the Working man’s Club people were out to win a fortune. There was no way they could win enough money to pay off their mortgage with a shout of “house”. Last night, at the Bingo emporium, that was a possibility – in the national game, if your final winning number was 99 (or “top of the shop” in the old days). The emporium doesn’t have time to spend on “two little ducks” when there are so many books to get through, and big bucks to rake in.
Posted by meljkerr at 11:02 am