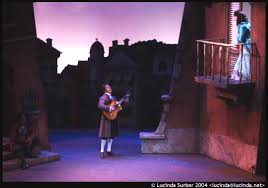 A serenade is “a composition performed for a lover, friend, or other person to be honored, typically in the evening and often below a window.” There is a scene in a film starring Mel Gibson that features a serenade. Mel Gibson’s character has been accidentally frozen in an experiment and he wakes up fifty years later. His sense of etiquette is fifty years out of date. He tells a young boy who is in love with a girl at school to sing to her. Time is too short to wait and sometimes you just leave it too late and the moment is gone. So the boy climbs a tree and sings “You are my sunshine” to her. The girl is somewhat embarrassed, but also delighted at the same time.

I have more than a few romantic bones in my body and that kind of thing would really appeal to me! If I had been a boy, I would have serenaded a girl – maybe. I did entertain the idea for a short while of persuading a guitar playing friend to join me outside my husband’s window – before we were married – and accompany me as I sang. My friend would have been up for it – but I am chicken-hearted at the best of times. Having been married now for some years, my husband wouldn’t have appreciated it. It might have been the death blow to our blossoming romance!

I was listening last night to a new worship CD I bought. It contains new Spring Harvest songs. Some of them are not new to me, but different arrangements of things we sing in our fellowship. It is a double CD. The first disc is very stage performance orientated – like it would sound if you had a wide variety of musicians. The second CD is a selection of some of the same songs,and some different, but much more acoustic – one singer with one guitar.

One of the tracks “Ever Faithful God” brought a picture to mind of a man standing beneath a balcony, guitar in hand, singing his heart out to the one he adored. In this case the one he adored was not a woman, but God.

I just love the picture of worship being like a lover serenading the one he loves. He or she may be in a room of a hundred or two hundred, but in his heart of hearts, he or she is alone, beneath a balcony, singing exuberantly.

Psalm 66:2 reads “Sing the glory of his name; make His praise glorious!
Posted by meljkerr at 10:37 pm