The Pen in Your Hand 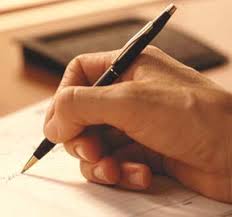 I caught the tale end of the news on Thursday evening after I had come home from a meeting.

It was an update of the situation in China. Days after the earthquake, rescue personnel had made it to the epicentre of the quake. There was lots of footage of the rescue operation. Planes flying overhead were discharging parachutes – some with men strapped into the harnesses, other with boxes of food and water. On the ground, men were shifting piles of rubble trying to reach those that had been buried. Watching as one school was being excavated, were parents looking for their children. I had forgotten the Chinese government had restricted each family to one child – and that one child was now buried under a pile of concrete! It doesn’t matter, I suppose, whether there is one child or a dozen in a family, the loss is still there and the parents are just as inconsolable.

There is one image that has caught my eye and stayed with me, and I have searched the net to find it, without success. It is of a school, or the remains of one. All you see is a single hand, uncovered in the rubbish. A child’s hand clutches a pen. I wasn’t listening to the narrator, just looking at the hand clutching a pen. I am sorry that I wasn’t listening properly. Something else came to mind, that at the time seemed to matter more.

As I said, I had been at a meeting. Some friends in another church had been over to Florida to be a part of whatever it is that Tod Bently has become involved in. I have perhaps muddies the waters of my mind by reading a selection of reports of what is happening over there – some enthusiastically rubber stamping it, and others calling it a false revival. I don’t know.

The couple reporting back were very enthusiastic and many people in the meeting caught their enthusiasm. We went into a time of worship and waiting on the Lord – as you do at some of these kinds of meetings.

The worship was excellent. The worship leader was really gifted and his song selection was just what I wanted to sing. I was in the zone. My heart was absorbed, but my mind was also at work. I have been to many meetings where the emotions run high, and people are whipped up into a response that isn’t always helpful. I wanted to be built up and not hyped up.

People shared pictures of what they thought God was saying or doing. I experience these things too, but I am never sure that it is not just my imagination! The picture that I had I didn’t feel was a shared picture.

I had the sense of being in a room with a whole load of presents. They were all shapes and sizes, colourful wrappings and ribbons, and very clearly labelled. I was walking around picking them up and not finding one that had my name on it.

To some extent I think the impression or picture was in response to how I was feeling. I didn’t feel qualified to be there. Many of the people there were involved in lots of “missional” things like healing on the streets and street pastors. They were buzzing with enthusiasm. I was feeling out of place – hence the idea of no present for me. You can see where I am coming from, perhaps.

I was getting rather dispirited about not finding my present when I had the impression of God speaking.

“There isn’t one.” My heart took a deep dive – It was like confirming that I really was in the wrong place. Then He went on to say, “I have already given you yours.”

I looked down at my hand and I was holding a pen.

“The pen in your hand is my gift to you. There is nothing better than that!”

I am not sure if can I convey the sense of profound privilege I felt. I am never more at home than when I am writing! To my mind there is something incredibly powerful about the written word and the written word read out loud.

I suppose that I might have dismissed the whole thing as just my imagination except for that one image of the child with the pen in their hand.

I can be Jonathan in this one thing! This I can do!
Posted by meljkerr at 4:08 pm